On the following pages I present selected photographs taken during my many backpacking trips.

This area is well-known to me from several visits in the past. The year 2000 did not offer enough time for a long hike and we decided for a comparably short round trip within the Baikal mountains.

The Sayan Mountains cover a big area in Siberia. We paid its eastern part a visit, traveling via Irkutsk and a long 500 km drive to the village of Shasnur. From there it was still a long walk to the main attractions, the hot springs and volcanoes.

Since my first visit in 1996, when we hiked from the Mutnovsky down to the village Ozernovsky in the south, I've come to Kamchatka three more times. In 1999 we made a 23 day hike from Kirganik to the hot springs in Nalychevo via the Uzon Caldera and the Karymsky Volcano. Then, two years later in 2001 we visited the area of the Kliuchevskoi, the most impressive volcanic group on the peninsula. Finally, in 2002 before our trip to Onekotan we paid a comparably short visit to the Opala volcano.

The Kodar mountain range some 500 km east of Lake Baikal was the area of choice in Summer 2003. The Kodar offers steep alpine mountains and is therefore popular among alpine climbers. It is easy accessible from the BAM railway, although it requires several days of traveling by airplane and train. The highest point of the range is Peak BAM at 3,072 m. BAM stands for Baikal Amur Magistral and was build during Soviet time, a railway parallel to the well-known Trans-Siberian Railway.

In 2002 we joined a scientific botanical expedition organized by the Institute of Biology and Pedology in Vladivostok, which was targeted to research the vegetation on the remote island of Onekotan. It took us some bureaucratic efforts to get a permit from the Federal Security Service, the Border Police, and a long helicopter flight to our destination.

By train it takes only one and a half days from Moscow to get to the northern Ural. We made a hike from the deserted town of Halmer-Yu through the mountains northeast of Vorkuta, called the Polar Ural. And in 2005 we completed a tour through the Subpolar Ural, south from the arctic circle, using the small town of Inta as a starting point.


Alps and other Mountains

Why always travel so far? Here are the Alps in the center of Europe, and I feel that I should go more often to the probably most famous mountains in the world. A trip to Italy inspired me to add a special page about the Alps. And there are other mountains beside the Alps that might be worth a few photographs, too.

The group of the Canaries and its northern neighbor Madeira are within easy reach of Germany and have established themselves as a popular target for tourism. They provide outstanding ground for hiking activities while at the same time delivering a luxurious and exotic climate. The contrast to more northern latitudes is especially pronounced in winter.

The landscape of Cappadocia is unique. Erosion has created a wonder from the massive tuff layers that were thrown out by catastrophic volcanic eruption a comfortable long time ago. Even with the thrill of a balloon flight, the beauty of the area is better discovered by hiking in the valleys. Accommodation is guaranteed, since Cappadocia became a touristic hotspot.

The term "Central Asia" refers to anything that is right in the middle of the big continent, not Siberia, but I included the Altai Mountains, whereas the Sayan will be joining Siberia at a later stage. Just my own little slicing of the world that makes me feel like God or a dictator while trying to introduce some structure into the growing mess of my photographs.

The island is still regarded as something that is too far away from civilization, exotic, too unforgiving, and, last not least, too cold to just fly over and spend some time in its wilderness. While this is partly true, the same applies for other wild stretches on this planet. Greenland offers some fine tours for the experienced hiker.

This interesting island had been on my list for a long time, but I hesitated over the thought of asphalt roads, all-terrain vehicles and the many tourists. Today Iceland is extremely popular, almost overcrowded, and darn expensive. And very beautiful, with spicy volcanic attractions thrown in. It offers easy prey for the normal tourist driving along the ring road, but also hard hikes over virgin territory.

Around the Mediterranean Sea

The Mediterranean Sea hosts a number of juicy hiking grounds along mountainous shores and on beautiful islands. Most of these locations are well within reach, often by cheap touristic travel. Last not least the warm climate enables us to hike this region outside the main season in autumn and spring, if not in winter time.

It's a long way from home, but it was worth it. The island became ever more popular over the last years, but the New Zealanders do an excellent job in managing the touristic crowds. As much as some restrictions may limit freedom, they also preserve nature and thus justify themselves. New Zealand offers a unique landscape with many endemic plants and animals. It feels a bit like another planet. We treated ourselves to a contrast program of a volcanic landscape on the North Island, followed by the Southern Alps on the South Island.

While traveling around in faraway places such as Greenland or Kamchatka, I didn't found it attractive to visit Scandinavia. Compared to the aforementioned places it seemed too civilized, not exotic enough. However, away from the considerably higher density of visitors, it hosts arctic landscapes with all their beauty, climatic roughness, and stands its ground against any other "wonder" on our planet. The first tour in Norway was to cross the Hardangervidda from south to north. No regrets, so far, and on we went for more.

There are indeed mountains on the British Islands, not very impressive when judged by sheer elevation, but so close by the sea a 1000 m high mountain means a real thousand meters difference in height. Shaped by glaciers, bare rock, the treeless landscape, the rough climate, and finally the right route - everything put together may challenge the experienced hiker.

To straighten up this page I put some islands situated in the belt between the Tropics of Cancer and Capricorn into one category. Impressions, vegetation, climate, their often volcanic origin, all these features make them more or less similar. Yet there are also differences, and hiking within the exotic landscape is fun, and gruesome in heat and high humidity.

Backpacking of the civilized sort: City tours, usually of the two or three day duration type that just may (or may not) give an overview of what a town has to offer to a visitor. And it provides me with an elegant way to continue on photography, should my old bones refuse from dragging a huge backpack over rocky terrain on some odd day in the hopefully far future...

The webpage of my Polish friend Piotr Celinski contains more photographs of Kamchatka as well as of other areas.

If there's somebody out there not interested in using GPS systems for orientation purposes I'd recommend the webpage of Henning Umland on Celestial Navigation.

What are the volcanoes in Kamchatka doing right now? Look for updated information on the pages of the Alaska Volcano Observatory.

And if you want to know more, have a look at the Holocene volcanoes of Kamchatka.

Many people enjoy riding a mountainbike. Some of them have already got as far as Kamchatka. Look at the site of Waltraud and Andreas. 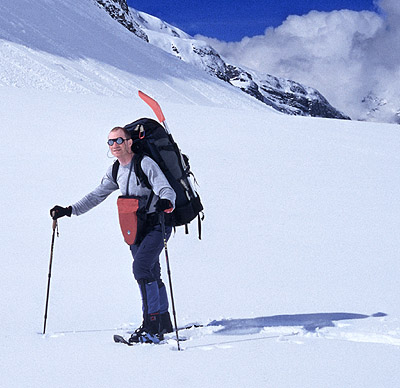 This page was originally established in 2000 to make some of my photographs available to my friends, just like the good old photo-album, after I had heard complaints such as "slides are fine, but it's a pain to project them, paper prints are much better". The internet makes it possible to present a few pictures without complicated procedures, however, some may again complain about too many pictures or may want a higher resolution or get into problems during downloading. I tried to find the best compromise between these factors, short download times in mind, and if somebody has an idea on how to improve this homepage, well, all ideas are welcome. When looking at old pictures, I realize that their size and resolution is outdated. Posted years ago with contemporary download times in mind, these photographs would benefit from a refreshment to meet today's standard, and I promise to do everything I can. Which means, I'll do almost nothing...